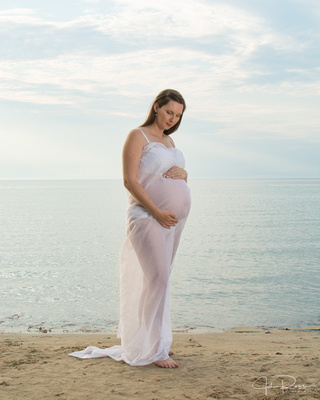 What could be better than shooting some maternity portraits at the beach?   All you need is the dress you ordered online.

When it comes to shooting maternity portraits one thing is certain, it won't go exactly as planned.   Women endure all kinds of changes when they become pregnant and it's not easy.   I'm not speaking from first hand experience mind you, so I have to go by what the women in my life tell me.   What I do know from personal experience is that like shooting weddings there is a lot of time pressure associated with when the shoot will happen.   Like shooting a wedding it's hard to do a reshoot if things don't go according to plan.  This is especially true when you travel two hours to get the beach location you want.  Finding time to reschedule that and do it before the baby is born can be a challenging.

When Lisa was preparing for her shoot she felt she needed some kind of a cover-up.   An exposed baby bump wasn't really her thing.  She decided to order something online that she thought would fit her needs.

After packing her two kids into the van for the two hour car ride to the beach she discovered she forgot to pack the one piece of clothing she purchased specifically for this shoot.

After announce her issue we brain stormed on what to do.    As part of my planning for this shoot I brought along some material that I was going to use for one of the pictures.  On this day that material would serve multiple uses.   The resulting image is posted here.   I've also included a picture we did a week later at another location using the dress that we didn't have the first time.